Organized crime may have made fewer headlines lately than insider trading, Ponzi schemes, and other white-collar crimes, but according to FBI Director Robert S. Mueller III, it is not “a thing of the past.” Speaking at the Milstein Criminal Justice Policy Forum, sponsored for the Citizens Crime Commission of New York City by Howard Milstein and his brother, Edward, Mueller reminded the audience that “Traditional criminal syndicates still con, extort, and intimidate American citizens.”

These are not Tony Soprano-style criminal enterprises, Muelller stated. The once-common regional crime organizations have been overtaken by international groups that are “more anonymous and more sophisticated,” he said. “Rather than running discrete operations, on their own turf, they are running multinational, multibillion-dollar schemes from start to finish.” The FBI is investigating such groups in Asia, Eastern Europe, Africa, and the Middle East in conjunction with partners in those areas

The FBI’s international work is facilitated by 60 Legal Attaché offices overseas where FBI agents work with the host country’s law enforcement personnel. “Through these partnerships—these friendships—we are on a first-name basis with thousands of officers around the world,” Mueller said, “all of whom share the same goal—keeping their citizens safe from every threat, every day.” 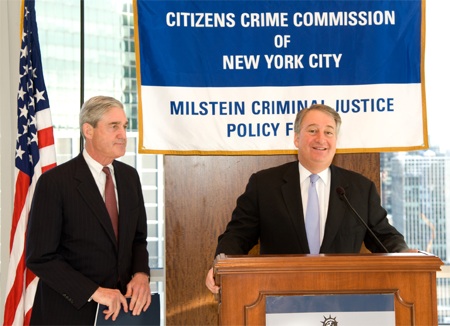