The New York Legal Assistance Group (NYLAG) held its first-ever Gala, celebrating its 20th Anniversary, at the Pierre Hotel on Wednesday, March 30, 2011. Under the theme of Empowering Women & Girls, NYLAG honored Abby S. Milstein, longtime Chair of the NYLAG Board, with its Visionary of Justice Award, and Sharon L. Allen, Chairman of the Board, Deloitte LLP, with the Corporate Leadership Award.

Governor Andrew Cuomo delivered remarks via video congratulating both honorees and recognizing the vital role NYLAG plays: “During these tough economic times when expensive legal services fall out of reach for so many, your attorneys have filled these gaps time and time again. And in the process you’ve given hundreds of thousands of people new confidence that justice isn’t just a lofty word thrown around in courtrooms or on television dramas – it’s a force they can see making improvements in their own lives.”

Honored with the Visionary of Justice Award for her longtime dedication to providing legal access for the less fortunate, Abby Milstein delivered a moving acceptance speech in which she reflected on her first pro bono case as a young law student. She added, “It is sometimes difficult for those of us with comfortable lives to fully comprehend the profound role a lawyer can play in a poor person’s life. We are not hungry, we are not trapped with a violent abusive spouse, we are not facing deportation, we aren’t threatened with foreclosure, we are not living in substandard conditions which harm our health. But thousands and thousands of our neighbors in this city face these crises and more. NYLAG exists for them.” 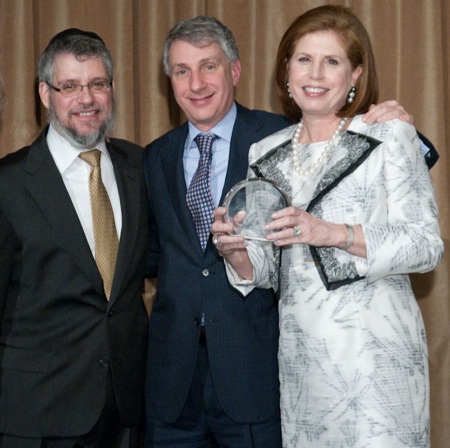