On May 16, 2011, Abby and Howard Milstein paid tribute to Dr. Howard Jones, a man who they described as their “hero.” In honor of Jones’ 100th birthday and his breakthrough work, the Milsteins hosted a party at the St. Regis Hotel in New York.

In a room filled with the leading figures in the field of reproductive medicine, the Milsteins encouraged the passing of the torch to a new generation of doctors.

In full voice, and without a single note, Dr. Jones spoke at length about advances in reproductive medicine and praised the Milsteins for their supportive role in those advances. “Thirty years ago, if a couple had trouble having a family, there was about a 50 percent chance that it could be solved. That figure now is 100 percent, with certain provisos. That’s really quite a remarkable statement. From 50 percent to 100 percent in a very short period of time. But it could be improved.”

Dr. Jones concluded by reading from “Stopping By Woods on a Snowy Evening,” a poem written by his former English professor, Robert Frost. After reading the closing line, “and I have miles to go before I sleep,” Jones added: “My own miles are limited. But I hope there are those in this room and elsewhere who will spend some of their miles going with Howard Milstein and the Board to make IVF more efficient, to make it available to all those who need it without any strings attached.”

Rising to the poetry challenge, Howard Milstein quoted from another Robert Frost poem: “I shall be telling this with a sigh, somewhere ages and ages hence. Two roads diverged in a wood and I, I took the road less traveled by.” “And,” added Milstein, “that has made all the difference. That difference is represented worldwide by some six million children who would not otherwise be here.”

Howard Milstein is Chair of the Howard and Georgeanna Jones Foundation, which supports research at the Howard and Georgeanna Jones Institute for Reproductive Medicine. A lead gift from the Milsteins enabled the building of the Institute at the Eastern Virginia School of Medicine. Later, Howard Milstein was instrumental in ensuring that the Foundation received a pro rata share of $20 million in patent revenues, which supported research at the Jones Institute. 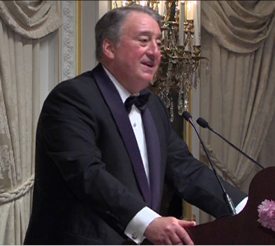