On October 31, 2011, the Jewish Theological Seminary (JTS) inaugurated the new Milstein Center for Interreligious Dialogue (MCID) with a lunch for leaders of the Jewish, Catholic, and Protestant communities. His Eminence Kurt Cardinal Koch was the guest of honor. Cardinal Koch is president of the Pontifical Council for Promoting Christian Unity, which includes the Pontifical Commission for Religious Relations with the Jews.

The MCID was funded with a gift from Howard Milstein and the Paul Milstein family. The Milsteins have a long history of engagement with JTS. Irma Milstein chaired the William Davidson Graduate School of Jewish Education and served on the JTS Board of Trustees. The gift from her family marks the second generation of relationship between the Milsteins and JTS.

There is a long fellowship between the Milsteins and the Catholic Church. Howard Milstein is Chairman, President and Chief Executive Officer of Emigrant Bank, which financed the building of St. Patrick’s Cathedral and most of the churches in the New York Archdiocese. For many decades, Emigrant Bank has provided support to Catholic Charities; Catholic Youth Organization; and Catholic schools, medical facilities, and parishes.

The director of the Milstein Center is Rabbi Burton L. Visotzky, Appleman Professor of Midrash and Interreligious Studies at JTS. He has been active in interreligious dialogue for more than three decades in the United States and internationally.  “The new center will expand the long commitment of JTS to interreligious dialogue and partnership, and enable us to highlight an annual schedule of distinct programs that range in complexity and content,” said Rabbi Visotzky.

Prior to the inaugural event, the MCID cosponsored a one-day academic colloquium on “Oral Transmission of Sacred Texts in Judaism and Islam” with Georgetown University’s Center for Christian-Muslim Understanding. The Georgetown/JTS colloquium brought together scholars on orality in each religious tradition to familiarize them with the scholarship of one another’s traditions and to open new vistas in scholarship and comparative religious studies.

Jewish Theological Seminary Chancellor Arnold Eisen, His Eminence Kurt Cardinal Koch, and Howard Milstein (left to right). Mr. Eisen holds a facsimile of a document from the JTS Library given to Cardinal Koch. The original was presented to Pope Benedict XIV in 1751 by the Jewish community of Rome in appreciation of his assistance when the Tiber River flooded in 1750. (Photo by Jack Miller) 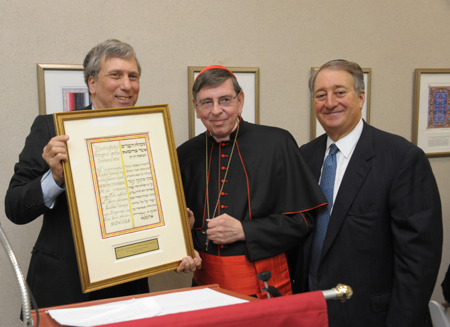