Emigrant Savings Bank was the primary financial supporter of the Mayor’s event, which took place on January 30, 2012, at the historic Emigrant Industrial Savings Bank building on Chambers Street that was once the bank’s headquarters. Mayor Bloomberg addressed attendees of the reception, who were then treated to a performance by the New York United Lion and Dragon Dance Troupe. Sun Guoxiang, New York Consul General for the People’s Republic of China, also attended.

Included in the event were many Chinese-American Emigrant banking customers from throughout the area.

Mayor Bloomberg and Mr. Milstein painted the eyes of the dragon used in the performance, a tradition that signifies bringing the dragon to life at the start of the New Year.

“We were honored to sponsor an event celebrating so important a holiday for the Asian-American community,” Mr. Milstein said. “For more than 160 years, Emigrant has served immigrant populations in New York City, and we continue to find innovative ways to build bridges with the Chinese community, both in America and abroad.”

The Lunar New Year is a tradition steeped in ritual and lore, and is the most important annual celebration for Chinese, Vietnamese, and Korean Americans. Derived from Chinese astrology, the moon’s lunar cycle begins in a different sign every year, each of which is denoted by an animal. Each lunar animal recurs every twelfth year. The Dragon, a symbol of opulence, power and innovation, marks this year’s Lunar Cycle, bringing with it a very welcomed positive and ambitious energy.

(Photographs and video: Office of the Mayor) 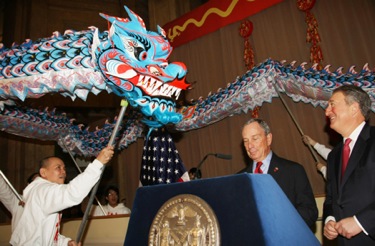