Among the firefighters honored at the Honor Roll of Life Ceremony was James Wildes, 37, of Engine 162 on Staten Island, who had an emotional meeting with the recipient of his stem cell donation, 6-year-old Alise Mareerose Williams of Evansdale, Iowa.

The Honor Roll of Life ceremony comes on the heels of another banner year for NYBC. In 2011, NYBC processed life-saving donations from more than 500,000 people, including millions of delivered donations of blood, blood products, platelets, hemophilia clotting factor, cord blood, and bond marrow.

“On behalf of everyone at the New York Blood Center, I want to thank the firefighters honored here today — and all who have helped contribute to the life-saving work of our organization,” said Mr. Milstein.

“Firefighters know what it takes to save lives,” Mr. Milstein added. “Today’s ceremony reminds us that, with each pint of blood and every blood marrow donation, all of us can play a role in saving lives as well.” 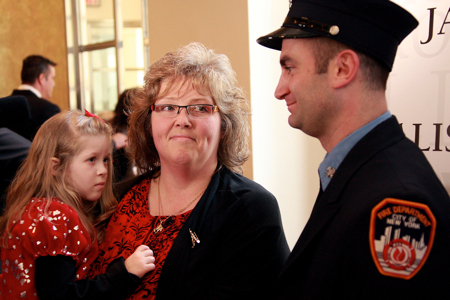 Alise Mareerose Williams was diagnosed with congenital heart defects at just two months of age. At 16 months, Alise had her second open-heart surgery. During the hospital stay, Alise’s blood tests showed that she had a very rare genetic disorder called Fanconi anemia, and would eventually need a bone marrow transplant to survive. A search of the National Bone Marrow Registry in September of 2008 revealed a match for Alise: Firefighter James Wildes.

Firefighter James Wildes joined the New York City Fire Department in May 2002. While a probationary firefighter in the FDNY Fire Academy in July 2002, Firefighter Wildes joined the Be The Match Registry. James believed that he should put his name on the registry in case there was a chance he could one day be a match for someone.   When James was contacted as a potential donor, he did not hesitate. Firefighter Wildes donated his bone marrow on February 3, 2009, at Memorial Sloan-Kettering. On February 4, 2009, Alise received the bone marrow transplant she so desperately needed. Three years later, she is doing wonderfully, and though her fight is not over, she has continued to improve.

More About the FDNY/NYBC Partnership

Members of the FDNY make up New York Blood Center’s single largest group of bone marrow and stem cell donors. To date, a total of 140 FDNY members have given these gifts to patients — in some cases more than once — accounting for 13 percent of all donors from New York Blood Center. Over the past 20 years, the FDNY has become the single largest group on NYBC’s bone marrow registry, with more than 8,000 FDNY members on the donor list. 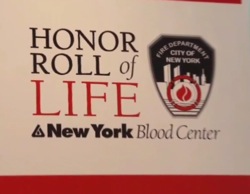 The FDNY and NYBC 2012 Honor Roll of Life Induction Ceremony.