Howard Milstein, Chairman of New York Blood Center’s Board of Trustees, was sworn in as an honorary FDNY Battalion Chief by Fire Commissioner Salvatore Cassano on March 7.

“Howard is a true friend to this Department,” Commissioner Cassano said during the ceremony at FDNY Headquarters. “He has always done the right thing for this Department, always been there to offer his help and support, and that’s why we’re here today.”

Mr. Milstein, who is also the Chairman and CEO of Emigrant Savings Bank, is a strong supporter of Sept. 11th-related charities and causes, including being a donor to and board member of the National September 11 Memorial and Museum.

Following September 11th, he was instrumental in the COPE campaign, which offered post-traumatic stress counseling to first responders and their families. In September 2011, he dedicated the statue of The Kneeling Fireman outside the headquarters of Emigrant Savings Bank in midtown Manhattan. It is the only midtown Manhattan memorial to all first responders and victims of the terrorist attacks.

“I accept this on behalf of all New Yorkers who want to support the FDNY and the great people at New York Blood Center,” Mr. Milstein said. “I’m delighted to support everything that the Fire Department does. This is unexpected and very much appreciated.” 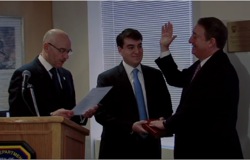 Fire Commissioner Salvatore Cassano swears in Howard Milstein, who is standing with his son, Michael.