At a ceremony at New York City Fire Department headquarters in downtown Brooklyn on February 27, 2013, Howard Milstein, chair of the New York Blood Center (NYBC), joined Fire Commissioner Salvatore Cassano and Christopher Hillyer, M.D., president and CEO of NYBC, to add the names of nine 2012 FDNY bone marrow donors to the FDNY’s “Honor Roll of Life.”“Both the FDNY and NYBC are focused on saving lives, and, in my opinion, are the best in the city,” Fire Commissioner Cassano said during the event. The bone marrow donors, he continued, “represent the spirit of giving back that makes this Department what it is.” Dr. Hillyer added, “Your heroism and dedication is an inspiration to us all. The FDNY is a true friend to the NYBC.”

In his remarks introducing three donors who met the people whose lives they saved, Howard Milstein looked back at the progress of treating cancers with bone marrow transplants and paid tribute to the bravery of the women and men of the FDNY. “As Chairman of the New York Blood Center and as a supporter of medical causes throughout the world, I have seen how the miracles of science help save lives,” Milstein said. “I have seen boys and girls, men and women, cured of diseases that were death sentences when I was growing up. It was unheard of for someone to survive a disease like leukemia and lymphoma 50 years ago. Today, we are seeing cure rates of up to 90 percent for some cases of leukemia and lymphoma among children, and the statistics continue to improve.

“That’s a testament to the work of the New York Blood Center, of course, home to the first and largest public cord blood bank. We’re a world-class research and educational institution and a local, regional, national, and global resource. But we never forget that our partnerships with organizations such as the FDNY are essential to fulfilling our mission. In the end, these are the true heroes. Whether it is running into a burning building, rescuing those in need in the wake of Superstorm Sandy, or donating marrow to a recipient they’ve never met, the brave men and women of the FDNY never hesitate to answer the call. Saving lives is truly in their blood.” 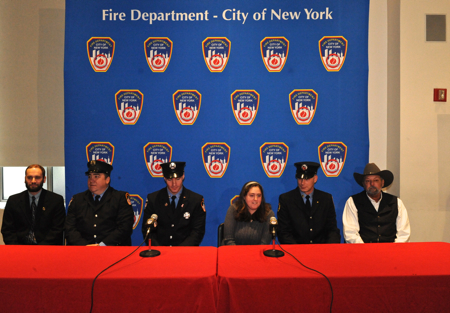 During the event, Firefighter Douglas Chiz, Ladder 136, met the recipient of his life-saving bone marrow, Angela Rugh, 23, from Jeanette, Penn. “I’m overwhelmed,” Firefighter Chiz said of meeting her for the first time at the event, “but this is all for her.”

At the age of 16, Ms. Rugh was diagnosed with a very aggressive form of Hodgkin’s lymphoma. She underwent chemotherapy, radiation treatments and a self-transplant of bone marrow.

Firefighter Chiz joined the Department in 2007 and signed up for the National Bone Marrow Registry with his classmates while training at the Academy. A few months later, he was contacted as a possible match for someone, and after much testing, he was confirmed as the best possible match.

The Firefighter’s parents, Bob and Mary Chiz, said it did not surprise them that their son would step up to help. “He’s very caring, willing to do anything to help anyone,” Mr. Chiz said, noting he was especially proud of his son because his good friend Firefighter Terry Farrell, who died at the World Trade Center, was also a bone marrow donor who spoke often about the importance of the program.

Firefighter Chiz said he was not sure what to expect when donating, but “the payoff was greater than anything I went through. It was minimal pain and discomfort, a very small price to pay for this reward.”

Today, Ms. Rugh is a junior at the University of Pittsburgh, majoring in psychology. “I never thought I would get to meet my donor,” Ms. Rugh said, adding that she did not know it was a firefighter who donated until a few days prior to the ceremony.

She also stressed the importance of the Registry, saying that every time someone signs up, “You can dramatically change someone’s life — give them a second chance, like I got.” 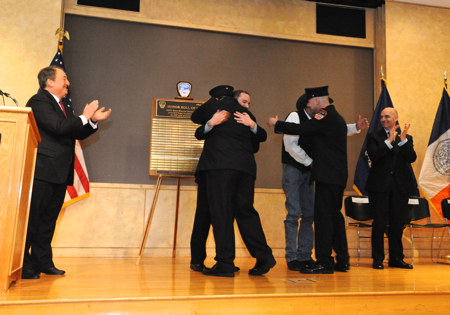