Howard Milstein and New York Blood Center were honored by the Be The Match Foundation for their contributions to the National Marrow Donor Program, which connects cancer patients with a match for a bone marrow or cord blood transplant. New York Blood Center (NYBC) received the Be The Match Hero Award in recognition of its efforts to ensure that bone marrow and stem cell donations went forward during Hurricane Sandy. Howard Milstein was recognized for his support of both NYBC, of which he is the Chairman of the Board, and the New York Fire Department, which also received a Be The Match Hero Award.

In her remarks citing New York Blood Center, Karen Dodson, National Marrow Donor Program senior vice president (Operations), recalled the emergency situation Hurricane Sandy created in October 2012 and how NYBC rose to the challenge. At the time, 18 people were scheduled to donate bone marrow that had to be delivered in 24 hours to patients who were waiting for it. Transportation was disrupted throughout the region and millions of people were without power.

“Throughout the ordeal, New York Blood Center was steadfast in their delivery of outstanding service to the marrow and stem cell donors who were undergoing the various medical procedures in preparation of donating; to the patients and their families who were anxiously waiting for their transplants to happen; and to the volunteer couriers who hand-deliver the precious lifesaving cells across the U.S. and the world,” Dodson said.

“Dr. Christopher Hillyer and his staff at New York Blood Center went above and beyond to make sure that all of the collections took place and all of the transplants proceeded on schedule, all while dealing with the aftermath of the devastating hurricane.”

Be The Match Foundation President Christine Fleming lauded Howard Milstein for his leadership of NYBC and support of the New York Fire Department. “Mr. Milstein, your generosity and philanthropic leadership has impacted thousands of lives in a way very few could do,” Fleming said. “As Chairman of the Board of New York Blood Center, among many other accomplishments your support in advancing cord blood as a source of stem cells for patients in need has been pivotal in advancing transplants for patients for whom adult matches are not possible.

“Your generosity to the New York Fire Department has been extraordinary, providing millions of dollars in funding and services to first responders who have been severely affected by two horrible, heartbreaking tragedies, 9/11 and Hurricane Sandy.

The impact of your leadership to both New York Blood Center and the New York Fire Department is not only felt locally, but globally, and tonight we honor you with a symbol representing your reach and impact around the world. We hope you will think of all the people you have helped each time you see this beautiful crystal globe.”

Be The Match®, operated by the National Marrow Donor Program®, is a nonprofit organization that is dedicated to helping every patient get the lifesaving transplant they need. As trusted leaders in advancing treatments for those facing life-threatening blood cancers, Be The Match provides the groundbreaking research, innovative technologies, patient support, and education that save lives. Be The Match has facilitated more than 55,000 marrow and cord blood transplants since 1987, or an average or nearly 490 transplants a month.

SOURCE: Be The Match Foundation 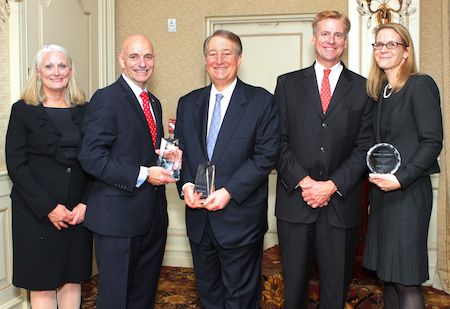