“The FDNY and NYBC’s combined efforts make a tremendous impact in our community,” said Mr. Milstein. “As we recognize the 10th anniversary of our ‘Honor Roll of Life’ program, the success of the FDNY’s bone marrow registry efforts, while gratifying, should not be surprising. Our brave firefighters never fail to answer the call. Saving lives is in their blood.”

“The 162 FDNY members on our Honor Roll of Life who have selflessly made donations of stem cells and bone marrow epitomize the lifesaving dedication of every member of this department,” said Commissioner Cassano. “Each of these beautiful stories is a life saved thanks to the incredible partnership between the FDNY, the New York Blood Center, and the Be The Match Registry.”

“Most recipients of bone marrow never get the chance to meet their donors. The fact that 162 FDNY members have given without question — and have done so knowing they will likely never meet the person they have saved — makes these gifts all the more meaningful,” said Dr. Hillyer. “Each one of these donors has gone above and beyond the call of duty, and all deserve our thanks.” 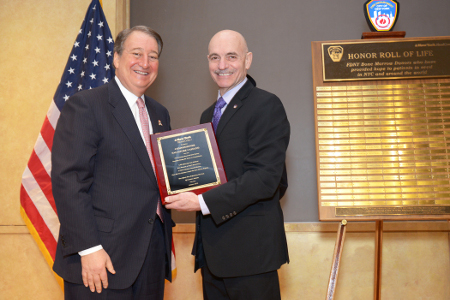 Howard Milstein and Commissioner Salvatore Cassano. Commissioner Cassano is holding a plaque recognizing his role in promoting donations of blood and bone marrow during his time as FDNY commissioner.