Howard Milstein welcomed Haley Barbour and Evan Bayh to the Miller Center at the University of Virginia, where they presented the initial findings of the commission they co-chair that is studying how to create and sustain new manufacturing jobs in the United States. Gerald Baliles, CEO of the Miller Center, chaired the meeting, which was attended by an overflow crowd.

The first commission is part of the Center’s Milstein Symposium: Ideas for a New American Century, a multiyear initiative that brings together policymakers, business leaders, scholars, and journalists to define and advance innovative, nonpartisan, and action-oriented ideas and policies to help rebuild the American Dream. The final report of the Commission on New Manufacturing and Job Creation will be issued in April.

The first year of the Milstein Symposium is focusing on renewing middle class jobs, and the first three commissions will examine topics in manufacturing, entrepreneurship and self-employment, and infrastructure investment.

In his remarks, Milstein said “I believe America’s best days lie ahead if we join together around the right ideas that can reinvigorate the American Dream for this new century. It is the power of ideas that brought us to the Miller Center to create the Milstein Symposium, not with the goal of producing white papers or endless lists of recommendations that can be read once and then filed away, but rather in a thoughtful, nonpartisan way to provide a roadmap of practical ideas to properly many of the issues that face us. That is what we are here to achieve, and I’m grateful to Governors Bayh and Barbour for the intensity with which they have immersed themselves in the work of this first commission.”

Barbour, former Republican governor of Mississippi, and Bayh, former Democratic governor of and senator from Indiana, presented their findings at a taping of American Forum, the Miller Center’s weekly public-affairs program broadcast on public television stations across the country. American Forum” is hosted by Pulitzer Prize-winning author Douglas Blackmon.

Among the recommendations Bayh and Barbour discussed were to reinvigorate and modernize skills training in high schools; loans, grants, and/or tax credits to support retraining workers who require high-tech skills; incorporate job, military, and/or skills training in college credits; create an online marketplace to give supply-chain advantages to small and mid-size manufacturing companies; and develop an online jobs database to match skills with available positions. 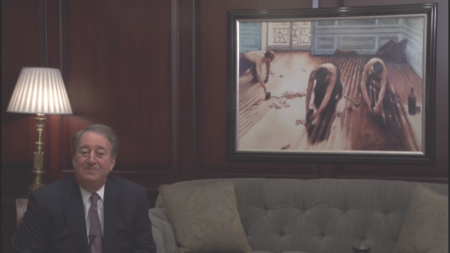