The highest civilian honor of France, the Legion of Honor, was awarded to Howard Milstein by His Excellency François Delattre, the Ambassador of France, in a ceremony at the French Consulate in New York. The Legion of Honor was created by Napoleon in 1802 and continued by subsequent governments of France “to reward extraordinary accomplishments and outstanding services rendered to France, based on a personal decision by the President of the French Republic. It is France’s highest distinction and one of the most coveted in the world,” Ambassador Delattre said.

In his remarks, Mr. Delattre cited Howard Milstein’s “venture philanthropy” through the Howard and Abby Milstein Foundation; “love of French culture, and French wine in particular,” as shown by the purchase and rejuvenation of the wine estate of Remoissenet; and commitment to education, culture, and the arts, among other accomplishments. Ambassador Delattre’s remarks follow, and Howard Milstein’s response can be read here.

Cher Bertrand et chère Laurence, whom I want to thank for hosting us in the French Consulate, a place that is dear to my heart.

Ladies and gentlemen, dear friends, it is a great pleasure and privilege to welcome you tonight to the Consulate on this very special occasion, as we are gathered here this evening to honor our friend Howard Milstein, one of the most respected investment bankers and real estate entrepreneurs in New York and beyond, and also a truly exceptional philanthropist and individual and a great friend of France.

I would like to extend a warm welcome to Howard’s family and friends who have joined us here this evening to express their support and admiration. With a special word of appreciation to your wife, Abby Milstein, to whom I also want to pay tribute today. It’s great to see so many friends and francophiles in the room, Christy Ferer, George and Jeri Sape—and I should mention by name each and every one of you.

Before proceeding with the ceremony itself, let me say a few words about the distinction that I will bestow upon Howard Milstein in a few minutes. The Legion of Honor was created by Napoleon Bonaparte in 1802 to reward extraordinary accomplishments and outstanding services rendered to France, based on a personal decision by the President of the French Republic. It is France’s highest distinction and one of the most coveted in the world—and you know the long tradition of French modesty …

Mon cher Howard, you were born in 1951, the son of Paul Milstein, grandson of Morris Milstein, a successful self-made man who had come to the United States with a strong desire to make his way through business, and eventually to engage in the philanthropic sector. Inheriting their skills and experience, you decided early on to follow in their footsteps.

Today, you serve as Chief Executive Officer, President, and Chairman of New York Private Bank & Trust and its operating bank, Emigrant Bank, as well as head of Milstein Properties, Milford Management, the Milford Agency and founding Chairman of the merchant bank Friedberg Milstein. This is truly impressive.

Public service also means a lot to you: You have chaired the New York State Thruway Authority since 2011, when the New York Senate unanimously confirmed your nomination for this seat.

Your outstanding commitment to the charitable world makes you—and your wife, through the Howard and Abby Milstein Foundation—one of the leading philanthropists in New York and in the country. In doing so you demonstrate day after day that bringing a businessman’s perspective to the appropriate areas of philanthropic endeavor can make a huge difference.

You strive to put this “Venture Philanthropy,” as you coined it, in practice every day with unrelenting energy through the Foundation. The Howard and Abby Milstein Foundation’s achievements and missions are truly extraordinary and encompass a very large array of sectors in medical research and healthcare delivery. You are also deeply committed to education, which you’ve been strongly supporting for 20 years as Trustee of Cornell University through initiatives such as the Milstein Scholars, set up to give middle class kids the opportunity to attend Cornell when their family would otherwise not have been able to afford it.

You have also lent your talents as a lawyer pro bono to the most fragile people of American society, through programs such as the Milstein Child Safety Center, the Milstein Criminal Justice Policy Forum, and a training designed to educate students to resist drug abuse. You also serve on the Board of the National September 11 Memorial Foundation, and co-chaired the COPE campaign, which provided post-traumatic counseling for New York City police officers and their families affected by 9/11.

I should also mention the fact that you’ve always nurtured an unflagging passion for art and culture, through your long-standing support to institutions as prestigious as the Shakespeare Theatre in Washington, the Musical Arts Association of Cleveland, the U.K. Royal College of Music, or, closer to us, the New York Public Library and the Museum of Natural History. I cannot list all of your commitments to so many philanthropic causes here, but I would like to pay tribute through these few examples to your generosity and big heart. And what is even more impressive is that you and Abby are personally committed to each of these causes—as I said, on a daily basis.

Cher Howard, you have long had a love affair with France—no offense, Abby, it’s an open secret and actually you are very much part of it. Your love of France, especially its way of life and art de vivre, is part of your DNA and is expressed through many of your activities that I just talked about.

As part of this endeavor, how could I not mention your leading role on the board of the Thomas Jefferson Foundation? Thanks to you and the tenacity of its leader, Dan Jordan, and the perseverance of its members, this foundation carried out the restoration of Monticello, the home of Jefferson. You’ve lent your support to this huge work, funding the construction of a new visitors’ center here, as well as great academic research projects aimed at preserving Thomas Jefferson’s legacy and making it available to everyone.

You also contributed to restoring Monticello’s wine cellar back to its original state, in close collaboration with the great wine producers that Thomas Jefferson himself favored. As you know President François Hollande paid a state visit to the United States two months ago—this was the first state visit of a French President in this country in nearly 20 years—and he visited Monticello with President Obama on this occasion (…).

Cher Howard, your love of French culture, and French wine in particular, is no secret to anybody. You never miss an opportunity to praise France’s cultural heritage, and have become one of the most prominent French wine connoisseurs and collectors on this side of the Atlantic.

Over the years you’ve acquired a unique collection of grands crus and great millésimes as well as a wine estate near Beaune, in the highly praised wine country of Burgundy. Together with your brother Edward, a Burgundy lover himself, you went so far as to buy the charming property of Remoissenet in 2004, a domaine whose creation dates back to 1877 and that had been family-run for almost half a century as Maison Remoissenet Père et Fils.

This sale included its vineyards and cellars—and what cellars!—since it was reported that over a million bottles of Burgundy from 1950 to 1990 slept in its shady recesses. Your goal is to make it flourish again and thrive on the international market, very much in line with your “venture philosophy” of audacity and hard work.

As a Commandeur in the Confrérie des Chevaliers du Tastevin, you feel personally entitled to propagating French Good Taste across the world. What energy you demonstrated in creating a wine distribution company in France. In this regard, you are helping to foster the French-American partnership, on the cultural and economic front as well.

Cher Howard, on behalf of the President of France, and in recognition of your personal commitment to French-American cooperation and friendship, it is a great privilege for me to now bestow upon you the insignia of Chevalier in the Legion of Honor. 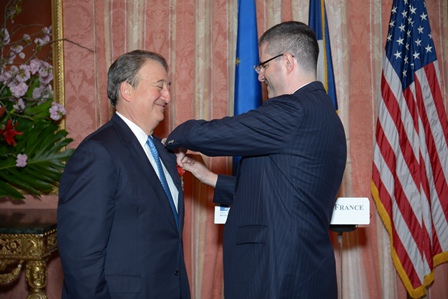 Ambassador Delattre bestowing the badge of a Chevalier of the Legion of Honor on Howard Milstein. 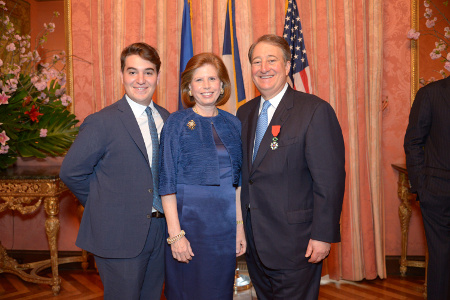