On the 11th anniversary of Honor Roll of Life, FDNY firefighter who donated bone marrow meets combat veteran recipient for the first time

During the ceremony, Firefighter Michael McCauley, 26, of Engine Company 242 in Brooklyn met the recipient of his lifesaving bone marrow, Aaron Faulkner, 33, of Pittsburgh, Pennsylvania, a veteran United States Marine Sergeant who saw combat in Iraq.

“FDNY members always answer the call,” said Howard Milstein, “and for more than a decade now, donors to the FDNY Bone Marrow program have helped countless families faced with the possibility of losing a loved one prematurely. We are all grateful to work with such altruistic and dedicated individuals.”

“We consider FDNY a wonderful partner, and its members some of the most steadfast and generous people in this city,” said Christopher Hillyer, M.D. “Most bone marrow recipients never get the opportunity to meet their donors, which makes the Honor Roll of Life ceremony a special event for all involved. More importantly, it highlights these brave FDNY members and their commitment to saving lives. They have all donated to someone they may never meet.”

“These eight FDNY members added to the Honor Roll of Life exemplify the selfless commitment to saving lives that has become synonymous with our department,” said Commissioner Nigro. “The FDNY has a long history of blood donation, and we are incredibly proud of our partnership with New York Blood Center and the Be The Match® Registry. We lead by example, encouraging more people join the registry to give the gift of life.”

In March 2013, Iraq War veteran Marine Sergeant Aaron Faulkner, 33, of Pittsburgh, Pennsylvania, was pursuing a B.A. in Christian Ministries and awaiting the birth of his second child when he was diagnosed with acute myeloid leukemia (AML), a cancer of the blood and bone marrow. Aaron required a bone marrow transplant, but without a family match, his name was placed in the Be The Match® Registry. Very quickly, Aaron was matched with Firefighter McCauley and in October 2013, he received the donation of peripheral blood stem cells (PBSC) that helped save his life.

Aaron has now fully recovered and is considering a Master’s degree. Aaron credits Michael for allowing him to “see my son turn 2, and my little girl eat her first birthday cake. I can play with them on the floor, pick them up and swing them around. I have hopes to see them both married, and meet my grandchildren. I can look forward to holding the hand of my sweetheart [his wife, Leslie] for so many years to come.”

Michael McCauley joined the FDNY in 2009, serving as an FDNY Emergency Medical Technician in Brooklyn and Staten Island before following his grandfather and uncle into the ranks of FDNY Firefighters in January 2013. Like thousands of FDNY Firefighters before him, Firefighter McCauley joined the Be The Match Registry while in Probationary Firefighter School at the Fire Academy on Randalls Island, knowing by doing so, he might be able to one day save a life. Three months later, he was contacted and told he was a match for a patient in need of a life-saving donation. In October 2013, just six months after joining the registry, Firefighter McCauley donated peripheral blood stem cells at Memorial Sloan Kettering Cancer Center. Michael is very happy that Aaron is doing well and hopes that he continues to enjoy his time with his family.

More About the FDNY/NYBC Partnership
Members of the FDNY make up New York Blood Center’s single largest group of bone marrow and stem cell donors. To date, a total of 171 FDNY members have given these gifts to patients—in some cases more than once—accounting for more than 10 percent of all donors from New York Blood Center. The FDNY/NYBC bone-marrow-donation partnership began in 1990. Over the past 20 years, the FDNY has become the single largest group on NYBC’s bone marrow registry, with more than 8,000 FDNY members on the donor list. Probationary firefighters are encouraged to sign up for the bone marrow registry during their training at the Fire Academy on Randall’s Island. This year marks the 11th anniversary of the Honor Roll of Life. In addition to participating in bone marrow donation, FDNY members run blood drives throughout the community. Last year, more than 2,100 blood donations were made at FDNY blood drives.

About New York Blood Center
New York Blood Center (NYBC) is one of the largest independent, community-based blood centers in the country. Each year, NYBC provides approximately one million blood products to nearly 200 hospitals in the Northeast. NYBC also provides a wide array of transfusion-related medical services. NYBC is also home to the world’s largest public cord blood bank, which provides stem cells for transplant in many countries, and a renowned research institute, which—among other milestones—developed the Hepatitis B vaccine and an innovative blood purification technology. For more information, visit: www.nybloodcenter.org

About Be The Match®
For people with life-threatening blood cancers—like leukemia and lymphoma—or other diseases, a cure exists. Be The Match® connects patients with their donor match for a life-saving marrow or umbilical cord blood transplant. People can contribute to the cure as a member of the Be The Match Registry®, financial contributor or volunteer. Be The Match® provides patients and their families one-on-one support, education, and guidance before, during and after transplant.

Be The Match® is operated by the National Marrow Donor Program® (NMDP), a nonprofit organization that matches patients with donors, educates health care professionals and conducts research so more lives can be saved. To learn more about the cure, visit BeTheMatch.org or call 1-800-MARROW-2. 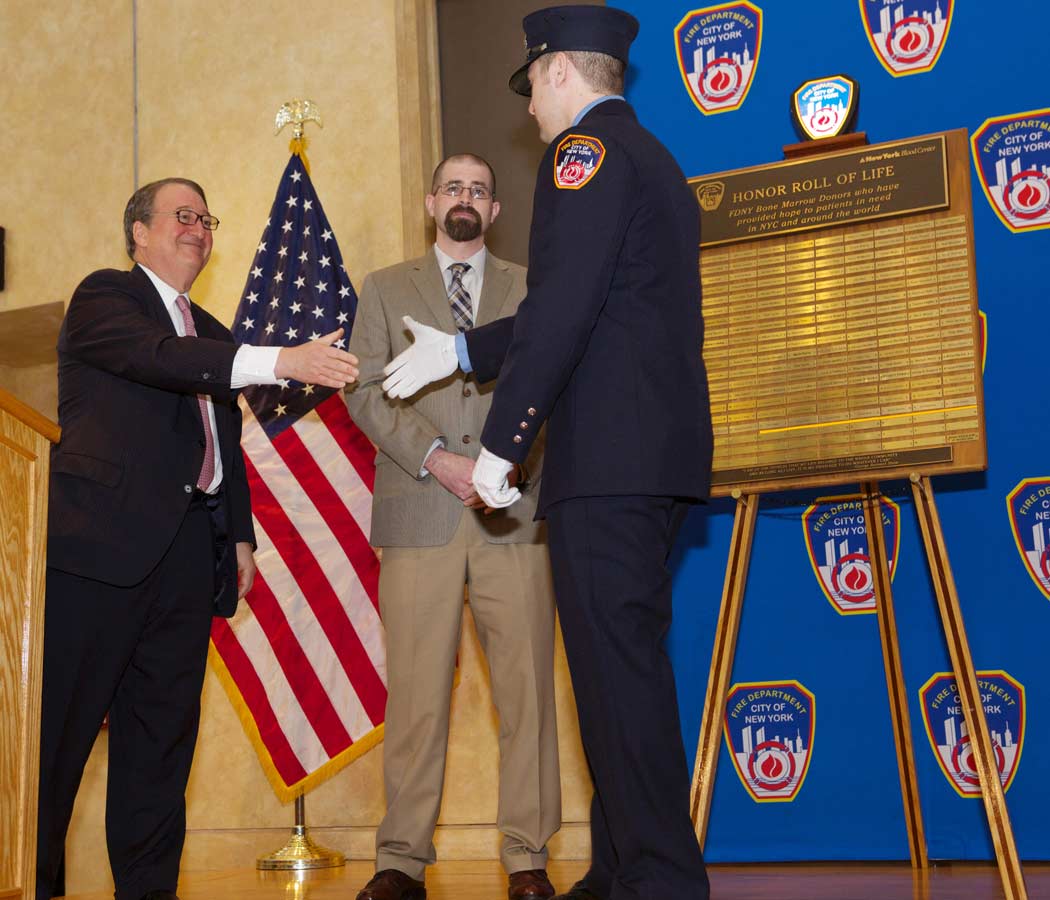