Nearly 1,100 men and women from the design, construction, and real estate community gathered at the New York Building Congress Leadership Awards Luncheon to pay tribute to industry leaders, including Howard P. Milstein, who received the 94th Anniversary Leadership Award. The event took place on May 13, 2015.

Weinreb said, “Howard leads a family that has been prominent in business and philanthropy for three generations. He is a well-known figure in local, national, and global affairs and a trusted advisor on economic, civic, and philanthropic matters.”

He added, “Howard’s leadership was demonstrated most recently at the New York Thruway Authority. His private sector experience in construction and large-scale development contributed to a design-build process that saved New York nearly $2 billion from the original cost estimates for rebuilding the Tappan Zee Bridge. And now the new bridge is rising—in record time, with record savings, and with record efficiency. Howard did his job and did it brilliantly.”

In addition to saluting his team at the Thruway Authority, Milstein took time to honor his father and grandfather, saying, “I am proud to follow in their footsteps as a builder and a businessman. I am grateful that they instilled in us the importance of giving back—of serving the city, state, and nation that has been so good to us.”

He added, “It is incumbent on everyone in this room to work together with government to ensure that we continue to prosper, compete effectively in the 21st Century, and remain the best place in the world to do business. We are the builders. Our nation needs us.” 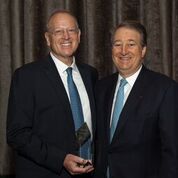