“The remarkable men and women of the FDNY always answer the call,” said Mr. Milstein. “New York Blood Center is a nonprofit with a mission to save lives through our blood-related products and research — and in that regard we could have no better partner than the FDNY.”

“Most bone marrow recipients never get the opportunity to meet their donors, which makes the Honor Roll of Life ceremony a special event for all involved,” said Dr. Hillyer. “The brave men and women who continue to be a part of the Be The Match® program carry on a tradition that dates back more than a decade. We are very honored to be partnered with the FDNY, and so thankful for their continued support.”

More than 8,000 FDNY members – more than 10% of all NYBC donors – are on the potential donor list and 179 members have already given this life saving gift to those in need. “In the FDNY – that’s our core mission – protecting life – and we measure our success in lives saved” added Commissioner Nigro.

FDNY has been part of the Be The Match initiative over 20 years, reuniting donors with their recipients during the Department’s annual induction ceremony.

In 2010 Amy Alcorn from Erie, Pennsylvania received a peripheral stem cell donation from Firefighter Michael Wilson. Ms. Alcorn was diagnosed with myelodysplastic syndrome (MDS) and had been undergoing chemotherapy while awaiting a donor. “I’m honored to meet Mike today” said Ms. Alcorn. “I feel very blessed. Everything has come full circle. I have such high respect for anyone in service, and for him to take the time to donate means so much to me.”

Jonathan Lamont Ragland of Louisville, Kentucky was diagnosed with thrombocythemia, a rare and chronic blood disorder. Mr. Ragland was in need of a transplant when he was matched with Firefighter Perdue. “I’m very grateful to him. “He has given me the opportunity to see my kids grow up” said. Mr. Ragland. “He’s already in the business of saving lives, so I’m not surprised that he decided to be a donor. It goes hand in hand with what being a Firefighter is all about.” 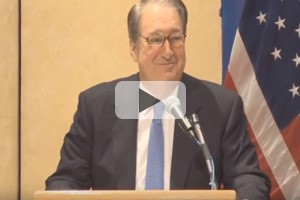 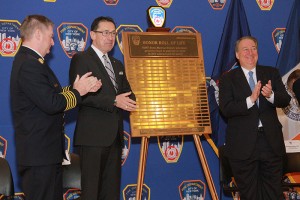 Fire Commissioner Daniel A. Nigro and Howard P. Milstein, Chairman of the New York Blood Center stand on either side of the plaque honoring FDNY bone marrow donors to the Honor Role of Life 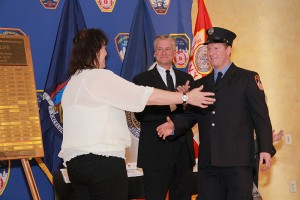