President Clinton: US in ‘dogfight’ for democracy

Are you willing to do what it takes to revive our democracy?

Former President Bill Clinton posed that question March 18 during a webinar on the state of American democracy hosted by the Institute of Politics and Global Affairs (IOPGA) at Cornell, challenging more than 3,600 students and other viewers to stand up for democratic norms including voting rights.

“We are at a fairly perilous point in our democratic journey,” Clinton said. “We’re in a dogfight.”

But the 42nd president said he was optimistic about the future, calling for a more inclusive politics focused on reducing economic inequality and encouraging engagement with – not demonization of – people with differing views.

“We’ve always been divided, and we’ll always have differences of opinion,” he said. “But we need to find a way to get enough of each other together to work together.”

Clinton’s conversation with Steve Israel, IOPGA’s director and a former Democratic congressman from New York, was the first event in the Milstein State of Democracy Address series sponsored by the Howard and Abby Milstein Foundation. The event was also supported by The Larry and Judy Tanenbaum Distinguished Speakers Fellowship of Sigma Phi. Watch a replay here.

“Our democracy needs to be revived, reshaped and revalued,” said Howard Milstein ’73. “That’s why the democracy forum is so important.”

Robert S. Harrison ’76, chairman of the Cornell Board of Trustees and former CEO of the Clinton Global Initiative, introduced his former boss, who answered questions – some submitted by students – and extended his scheduled participation by a half-hour to engage with faculty experts involved in IOPGA’s Campaign for the Future of Democracy. Launched earlier this year, the campaign seeks to strengthen resilience against attempts to undermine democratic norms at home and abroad.

Clinton said effective implementation of the $1.9 trillion American Rescue Plan Act – passed recently with no Republican votes – would help restore confidence in federal government, but said norms have suffered over time from people “playing around the edges” of them.

“Democratic norms have been being stomped on for quite a while by people for fun and profit,” Clinton said.

Regarding the Jan. 6 assault on the U.S. Capitol, Clinton said people should be bothered by how many Americans don’t believe in norms, and pointed to resentments fueled by economic stagnation and unprecedented social change. But he said most Americans were horrified by the violence that day and respected the election’s outcome.

“That should make you hopeful,” he said. “There is a core from which we must build.”

Asked by Kazuma Parkinson ’23 of Pittsburgh how to talk with friends or colleagues with opposing views, Clinton said to get to know political opponents as three-dimensional people, not cartoon characterizations seen as enemies. He highlighted the Presidential Leadership Scholars program, a collaboration with former President George W. Bush, as a model for meaningful interaction.

“There ought to be something like that on every campus, where people get a chance to actually listen to other people say what they believe, why they believe what they believe, and also to see how they define themselves, what is critical to their identities,” he said. “Because we’re basically in a country with a big identity crisis now, as you could see on Jan. 6.”

Responding to a question from Valetina Xu ’22 of Long Island, Clinton said social media has both broadened perspectives and exacerbated polarization. He appreciated, for example, that his own podcast, “Why Am I Telling You This? with Bill Clinton,” was available to anyone, but lamented the spread of misinformation and predispositions to seek out facts and opinions confirming our own views.

“A lot of us now are in such a bunker mentality that the social media reinforces that,” he said.

We’re all tribal, Clinton said, joking about his allegiance to University of Arkansas basketball teams competing in March Madness. But he called himself an “inclusive tribalist.”

“We have to go back to being inclusively tribal,” he said, “if we want to make the most of the future and we want to get rid of a lot of these inequalities.”

Israel, a professor of practice in the Department of Government in the College of Arts and Sciences, thanked Clinton “for inspiring us and for giving us hope, but also a pretty candid view of the work ahead of us.”

Then instead of leaving the Zoom event as scheduled, Clinton listened and responded to reactions and commentary from three Government faculty members.

“For the first time in American history, all four of these threats have converged and they’re all at a very high level,” she said. “We really need to take seriously, I think, what President Clinton said about how we all need to do our part to strengthen democracy.”

Rachel Beatty Riedl, the John S. Knight Professor of International Studies and director of the Mario Einaudi Center for International Studies, also highlighted Clinton’s call to action, encouraging people to get involved not only with members of Congress but with local councils and school boards and state officials.

“It is essential that none of us turn away from reforming institutions,” she said. “Don’t disengage, don’t think it’s futile, don’t turn away from working within the system.”

Douglas Kriner, the Clinton Rossiter Professor in American Institutions and IOPGA’s faculty director, pointed to the need for institutional reforms – such as to the filibuster – that could help rebuild trust.

“Are there changes that we can make to strengthen the ability of Congress to once again be the people’s branch?” he said. “Overcoming that would go a long way to combatting some of the erosion of trust, this perception that government can’t work.” 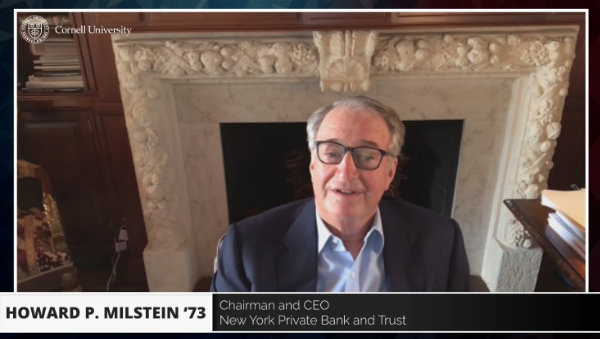 Click the video to watch the Introduction and Full Event featuring President Clinton.