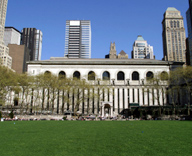 The Milstein family has repeatedly come to the aid of Americans in times of crisis. In the wake of 9/11, when Hurricane Katrina devastated the Gulf Coast, and when the mortgage crisis hit in 2008, Howard Milstein reached out through both his public and private philanthropic work to assist individuals and communities in need.

But Abby and Howard Milstein’s intense involvement in civic affairs extends far beyond acute crises to the chronic problems that plague their beloved New York City. Howard Milstein has spearheaded moves for transparency, accountability, and integrity in the real estate management industry and Business Improvement Districts and has provided valuable guidance to the City through the Real Estate Board of New York. He served as Chairman of the New York State Thruway Authority between 2011 and 2014 and on the Governor’s Real Estate Advisory Council, New York City’s Advisory Commission on the Homeless, New York State Advisory Committee for the Preparation of a Land Development Guide, and as an advisor to the Commissioner of New York’s Department of Housing, Preservation and Development.

Abby Milstein provides civic leadership through her service as the Vice Chairman of the Board of Trustees of the New York Public Library, the Public Design Commission, the Association of the Bar of the City of New York and New York Legal Assistance Group.

Providing Legal Services To The Poor