“The Milsteins are among Cornell’s great families in the University’s history.”

Starting in the 1970s, two generations of Milsteins have attended Cornell University. Howard Milstein devotes a full day each week to serving the University as a Trustee, Presidential Counselor, Overseer of Weill Cornell Medical College, member of Cornell Investment Committee and Chair of its Real Estate Sub-Committee, and a Founding member of the Cornell Club.

College of Arts & Sciences – The Milstein Scholars program was established in the 2001-02 academic year. As of 2008-09, 35 exceptional students have received support that gave them access to a Cornell education.

Similarly, the retention and recruitment of top-flight arts and sciences faculty has been facilitated by the Howard Milstein Fellowship for Faculty Excellence and its successor program, the Milstein Faculty Fellowships for Strategic Hires. Since inception in 2006, this program has helped attract four noteworthy scholars in the disciplines of Physics, Classics, Philosophy and Anthropology.

College of Agriculture and Life Sciences – The Asian Longhorned Beetle (ALB), a serious pest problem in China, has migrated to the U.S. ALB has been found in New York City and Chicago, as well as other urban areas and suburbs. Given the millions of acres of contiguous hardwood forests in this country, the potential impact is devastating.

With help from the Milstein Foundation, Cornell’s Department of Entomology is in the forefront of conducting research in eradication of ALB. Their controlled studies of the use of non-woven fiber bands impregnated with insect-pathogenic fungi have yielded highly promising results and produced a series of prestigious peer-reviewed papers.

Cornell’s architecture program is one of the oldest and most venerable in the U.S.  Ranked the top architecture program in a 1999 poll, its existing facility was severely criticized by the National Architectural Accrediting Board. That problem was solved in 2007 with the dedication of Paul Milstein Hall, a new home for Cornell University’s undergraduate architecture program.  Milstein Hall, at the nexus of the central and north campuses, serves as a gateway structure that perfects one of Cornell’s key entrances.  As such, it is having the same catalyzing effect on the Cornell campus that Milstein development has had in New York City.

On Site Volunteer Services (OSVS) – OSVS is a student-run organization that provides volunteer opportunities for the Cornell community to work with Tompkins County social service agencies.  In so doing, OSVS provides Cornell with a means to connect and contribute to Ithaca and its environs.  The Milsteins, firm believers in mandatory social service as part of good citizenship, have been staunch supporters of OSVS.

“Cornell has played a significant role in our family’s lives. A university is a gateway to life. Helping to create a gateway to the Cornell campus is a fitting way to underscore our commitment to this great institution. But it’s also a tribute to our father, who made Cornell possible for us and served as a role model for what it means to give.”

Howard Milstein, 2008 Cornell Entrepreneur of the Year, delivering his keynote speech at the University. 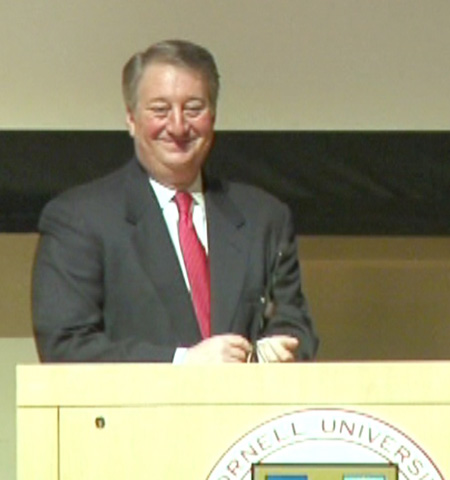