The Milsteins marked the turn of the new millennium with a far-reaching undertaking: the Irma and Paul Milstein Division of United States History, Local History and Genealogy at the New York Public Library.

The Milstein Division includes a vast photo archive of more than 30,000 images along with an exceptional collection of books, press clippings, diaries, periodicals, pamphlets and other materials documenting every aspect of American life. After the General Research Division, the Milstein Division is one of the most highly used areas of the Library. Pulitzer Prize-winning historians Robert A. Caro, Edmund Morris and Barbara Tuchman have found materials for their books in the Milstein Division, which has also been used as a resource by A&E’s Biography and ABC’s Good Morning America. An unparalleled collection of records tracing the lives of New York City’s residents, the Milstein Division contains: manifests of arriving ships; church, cemetery and city records; census records; and city directories.

Among the treasures of the Milstein Division is the Emigrant Bank archives, which opens a window into the lives of the early Irish immigrants — and their successors — who opened accounts at that historic institution. During 2007 and 2008, the New York Genealogical and Biographical Society turned their entire archive over to the Milstein Division, thus making it one of the largest and most comprehensive genealogical collections in the world.

“The New York Public Library and the Milstein family are the crown jewels of New York…. I am delighted that these dear friends of mine have given stability to one of the country’s most extraordinary collections of American and immigrant history.” 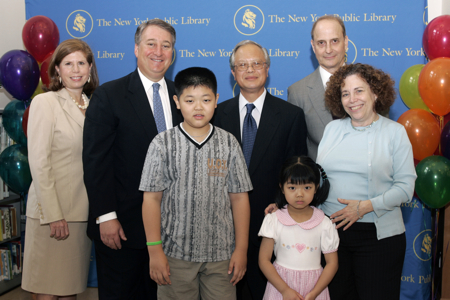