In 2007, the Milstein family launched the Milstein Medical Research Program at The Rockefeller University, led by Dr. James Krueger. Dr. Krueger’s early work led to a revolution in the treatment of psoriasis. He found that T-cells, rather than an aberration of the immune system, were the triggering mechanism for psoriasis. That discovery led to a whole new world of drugs for treating the widespread skin disease. This has been a special boon for sufferers of psoriatic arthritis, which is totally crippling.

Dr. Krueger is now applying the same out-of-the-box thinking to the Milstein Medical Research Program, where the initial focus is melanoma. Metastatic melanoma is a death sentence that kills one person every single hour in the U.S. With depletion of the ozone layer, melanoma is becoming an ever greater threat. The greatest hope for a cure is to understand the initial step in the metastatic process and block it there. And that is exactly what Dr. Krueger’s research is doing. Krueger and his team are using advanced genetic methods and imaging techniques to learn how “melanocyte” skin cells become malignant. In so doing, Krueger’s work will show how their genetic and structural changes are correlated in later stages of the disease. Information gained from these experiments will lead to much more accurate diagnostic techniques and more effective treatments.

“They get very few grants on melanoma at institutions. There’s been no uniform foundation to go after melanoma as a specific killer…. [Howard Milstein] has a vision of curing melanoma. And he’s probably going to live long enough to see that come about.” 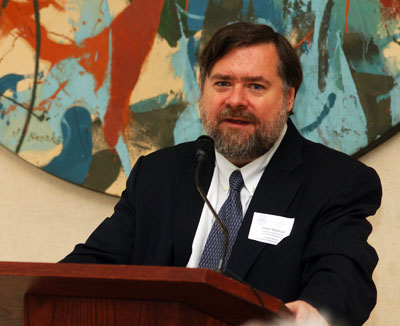