Making The World A Safer Place for Children

The National Crime Prevention Council – and its widely recognized icon, McGruff – has been a vital part of this nation’s crime prevention efforts since 1982. In 2001, a report released by the David and Lucile Packard Foundation revealed that computers had become a fixture in many children’s lives. Of the then 70% of households that had computers, 52% were connected to the internet. Of the 49 to 63 minutes a day that youngsters spent on-line, much of that time was unsupervised. As an organization that is deeply concerned about child safety issues, NCPC and Edward Milstein knew that it is vital for children to learn how to protect themselves. To that end, in 2002, they created the McGruff.org Milstein Child Safety Center with a major grant from the Milstein Brothers Foundation.

The Center taps into the power of the internet and provides an interactive, dynamic, compelling resource for children, their caregivers and the adults who work with youth. McGruff.org is the nation’s leading crime prevention website for children, with hits from every region of the U.S. and from places as far away as Australia, Brazil, Dubai and Malaysia.

The use of the website has increased dramatically from year to year, with more than 509,000 visitors – most of them unique – viewing over 3 million pages in 2007. In both 2006 and 2007, the McGruff.org Milstein Child Safety Center won the “Webby” Award from the International Academy of Digital Arts & Sciences. 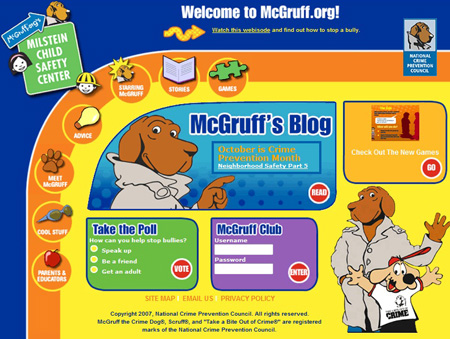